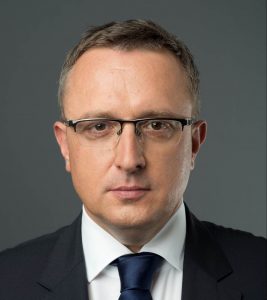 Professor at SGH Warsaw School of Economics (Head of the Business Law Department) and at Cardinal Stefan Wyszynski University in Warsaw, Faculty of Law and Administration. Member of Civil Law Codification Commission (for the term of 2015-2019, dissolved in December 2015). He organised, and since inception has been Director of, Postgraduate Studies “Academy of Corporate Law” at SGH Warsaw School of Economics.

As part of his academic work abroad, he studied American Corporate Governance under Prof. R. Buxbaum (Boalt Hall School of Law, UC Berkeley) and Comparative Corporate Governance under Prof. K. J. Hopt (MPI, Hamburg). He also received a Kosciuszko Foundation Fellowship from the University of California, Berkeley (2004). Participant of international conferences and symposiums (including at Columbia University, Hong Kong Polytechnic University, New York University, Princeton, Stanford and Tokyo University).
Professional competencies of Prof. Siemiątkowski in legal practice pursued since 2009 in Głuchowski Siemiątkowski Zwara Law Firm, and earlier in Siemiątkowski Law Firm and two American law firms, are focused on the areas of corporate law, corporate governance, M&A and restructuring, capital market law, arbitration pharmaceutical law and energy sector. He has participated in the preparation of IPO of the first company organized under the foreign law whose stocks were admitted to public trading in Poland, and represented the Polish Confederation of Private Employers “Lewiatan” in the proceedings before the Constitutional Tribunal in the case regarding introduction of the obligation to apply the official margins and the principles of pricing of imported medical drugs, obtaining the verdict in favour of his client. He has also been a member of the team to develop the first concept of dividend payment in bonus shares in the Polish public market.

Prof. Siemiątkowski is a judge of the Stock Exchange Court at GPW S.A. (Warsaw Stock Exchange) and an arbitrator of the Court of Arbitration at Polish Commercial Chamber in Warsaw, Court of Arbitration of the Polish Confederation of Private Employers “Lewiatan”. He is also a member of the American Law & Economics Association.
In 2016, he was included by the Dziennik Gazeta Prawna daily on the “List of 50 Most Influential Lawyers in Poland” and was awarded with the “Golden Paragraph”, granted for outstanding achievements in the field of law (for activities for the benefit of law and economy).

In the “Ranking of Law Firms 2018” of “Rzeczpospolita” daily, he took the first place as a leader in the field of “Company Law and Commercial Law”. In 2019, he was nominated in this field.