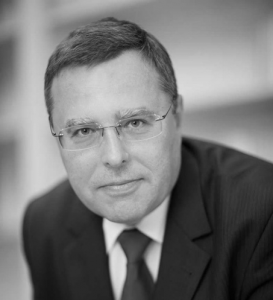 Magister Prawa - an UK equivalent of Master in Law and an US equivalent of either an LLM (Master of Laws) or a J.D. (Juris Doctor)

Dariusz is widely recognized for being the first (and to date only) Pole to head a global law firm. Furthermore, he led it to a dominant market position in Poland and ultimately transformed it into the largest law firm in the world.

In 1991, he established Salans’ office in Warsaw, which he subsequently managed for 10 years. In the same year, he was promoted to equity partner level in an international law firm as the very first ever Polish qualified lawyer. In 1999, he was elected a member of Salans’ Global Board, a position he subsequently held for 14 years. Since 2005, Dariusz was the Global Managing Partner of Salans for three consecutive 3-year terms. Under his leadership, Salans more than doubled its size and revenues and expanded its geographical presence with six new offices, making it the sixth-largest independent law firm in Europe in 2012.

Dariusz is one of the founders of Dentons. In 2013, he led Salans into its tripartite merger with SNR Denton and Fraser Milner Casgrain as well as in the led merger talks with US firm McKenna Long & Aldridge (completed at a later date). In 2014, he was instrumental in Dentons’ merger with the largest Chinese law firm Dacheng, leading to the creation of 大成 Dentons, which ultimately became the largest law firm in the world and a top 10 firm on the Acritas 2017 Global Elite Brand Index.

Dariusz was Dentons’ Europe Chief Executive Officer, responsible for strategic management, market position, development and growth, as well as financial performance of the Europe region. He was also one of the key leaders of Dentons, a member of Dentons’ Global Management Committee and Global Board.

Since 1999 he has been an Arbitrator in the Arbitration Court at the National Chamber of Commerce.

Dariusz was the Chairman of the Supervisory Board of Polska Telefonia Cyfrowa PTC, one of Poland’s largest telecoms operators. He served on the supervisory board of a listed National Investment Fund, one of the main vehicles for the Polish mass privatization program.

Dariusz has over 30 years of experience in representing international corporations, private equity funds, banks and other institutional clients in M&A, equity investments, corporate restructurings, structured finance and large asset finance transactions. He is well known for his role in one of Poland’s landmark commercial disputes, where he led the Polish team in advising Vivendi on their 11-year-long multijurisdictional battle with Deutsche Telekom concerning control over PTC.

Dariusz was also a consultant to the World Bank on Polish corporate governance law issues.

Since 2016 Dariusz has been a Member of McKinsey & Company’s Online Executive Panel.

Dariusz has been widely recognized as a leading practitioner in the fields of M&A, Corporate and Energy Law by The Legal 500 EMEA, Chambers Global, PLC Which Lawyer? and European Legal Experts. Recently he has also been recommended in Poland by the Best Lawyers publication (2016-2017) in two categories: Corporate and M&A. In December 2018 he was awarded a prestigious prize of The Lawyer of 30 Years by the Polish daily Rzeczpospolita and the Polish Association of Legal Employers, in recognition of his significant contribution to the establishment and development of legal profession in Poland and the role he played in the biggest M&A transactions and privatizations in Poland during past 30 years.